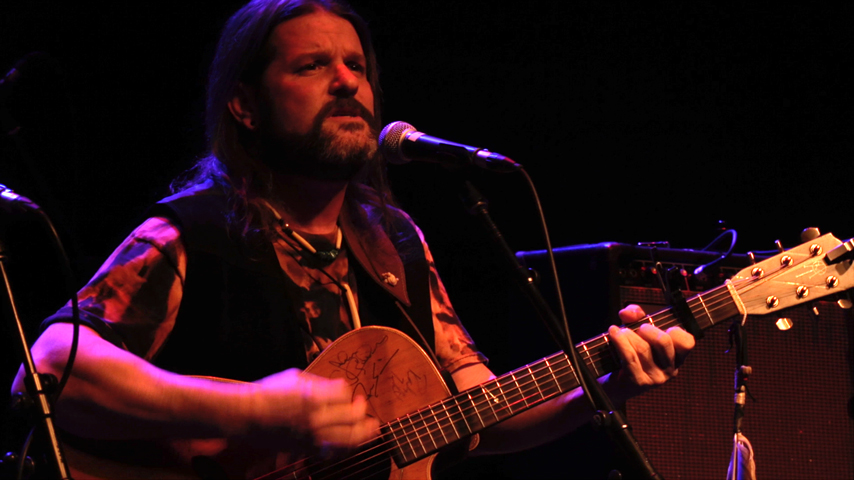 Drawing his strength from his ancestral roots, Jim Beer is an accomplished singer, song writer and guitarist, of Lena’pe Indian descent. Jim was born and raised in Southeastern Pennsylvania once occupied by his ancestors, “The Grandfather People”.

His love for his homeland and his people are expressed vividly in songs like “Muddy River” and “Lena’pe Honoring Song”, while his deep concern for other native peoples, their struggles, and the continuing injustices heaped upon them can be found in songs such as “Free Leonard Peltier” “Sing a Prayer for Big Mountain” and “Good day to die”.

Though Jim finds inspiration in other performers such as Bill Miller, Neil Young, Lynyrd Skynyrd, the Guess Who and Pete Seeger, his musical artistry stands alone. Jim conveys through his music a strength and spiritual conviction beyond his years. In his own words, Jim relates the feeling that “there is an old soul moving with me”, further stating that, “I like to sing songs that would make the old chiefs proud”.

Jim plays with consistent enthusiasm. The combination of his heartfelt lyrics and skillful musicianship moves the heart and transports the listener to places both deeper and higher than one might first expect. While the Native influence can be easily discerned, his songs transcend cultural limitations, touching upon the experiences of family, of friends, of love, and of life’s challenges and pleasures common to human beings everywhere. His care and concern for the two-leggeds, the four-leggeds, and the winged creatures of “Turtle Island” (Planet Earth) are obvious throughout his music. Jim frequently lends his support to those involved in protecting our precious environment, and his concern and sensitivity is evident in songs such as “Mother Nature”.

When Jim was only 6 yrs old he would take guitar lessons side by side with his Grandmother, Ruth, who played the mandolin. For nearly 4 yrs Jim and Ruth would continue learning together and performing at local nursing homes where Ruth’s friends lived. But at age 9 Jim and his Grandmother were in a serious car accident resulting in head trauma for Jim. Jim could no longer read music for the guitar. After moving out of his grandmother’s house at age 10, Jim lost interest in playing the guitar. It wasn’t until the age of 15, while in recovery from drug addiction, that Jim would pick up playing the guitar again.

In 1995 Jim recorded his first cd, “TURTLE ISLAND” (originally released as a cassette) in Macon Georgia at MUSCADINE STUDIOS, owned and operated by musical hall of fame legend Paul Hornsby. Paul Hornsby was executive producer for Capricorn Records in the days when Charlie Daniels and Marshall Tucker Band were putting out some of their biggest hits. Paul played with, traveled with, and engineered the music of these musical wonders. He had also played in the band THE HOURGLASS, with Duane and Greg Allman. Jim and Paul hit it off not only as fellow songwriters and musicians but formed a friendship that would last through the years. Paul has played piano and keyboards on all of Jim’s releases to date. Paul also introduced Jim to Chris Hicks, another amazing singer songwriter and guitar player who is a member of The Marshall Tucker Band. Chris and Jim would also spark a friendship and Chris was brought into the studio to cut guitar tracks on “Lenape Honoring Song” and “Sing a Prayer for Big Mountain”. Herman Nixon, former drummer for Molly Hatchet, also played drums on Big Mountain. “The making of Turtle Island was a wonderful and blessed experience”, says Jim.

Though Jim is an accomplished solo performer, he spent several years being backed by his band The River (also known as UNAMI), whose members were Todd Zieseness, Tony Dominic, and would later include Jerry Daub. Together they created a dynamic mix of contemporary and traditional sounds. In 1998 Jim Beer and The River released “Dust of our Forefathers Bones” which would be nominated in the Native American Music Awards for “Best Independent release.” That year Bill Miller’s “Ghost Dance” was also nominated for best Independent release. Although Jim did not win the award he did get to perform live that night with Bill Miller who took home 5 Awards!!! Jim’s reaction?…“Playing on stage with Bill Miller ANYTIME beats winning an award, and especially tonight! He was one of my greatest inspirations to create music in a studio. I love this guy!”

Jim Beer and the River continued playing and gathering followers selling out venues like Godfrey Daniels, Tin Angel, The Chameleon, and Sellersville Theatre. In 2002 they released the cd “Seven, a tribute to Hawk Little John” in memory of Jim’s beloved friend and teacher. Hawk was a gifted flute maker who fashioned all the flutes that Jim played live. He also made flutes played by Carlos Nakai and many other recording artists. Most importantly he made hundreds of flutes played by his family and friends, and their friends, and their friends. “He said the flute was the breath of the earth,” says Jim. The “Seven” cd would also go on to be nominated in the 2002 NAMMY Awards.

Since 1990 Jim would also frequent West Virginia to play solo gigs, or often as a duo with Jerry Daub, playing outdoor festivals, private parties, and “mountain state” honky tonks. Jim would often play venues with his good friends there, Mike Morningstar and Chris and Donnie Davisson of the Davisson Brothers Band. For several years it was tradition for the 4 of them to play a New Year’s Eve gig together. “Black eyed Logan” written by Mike, was a song that Jim fell in love with and recorded in the studio. It features Mike on harmonica and hickory stick. In 2017 Jim was honored to be part of the Davisson Brothers Band’s video for their hit song “Po Boyz.”

In 2006 a new opportunity was held out to Jim and he would become the lead singer for Tuesday’s Gone, a Lynyrd Skynyrd tribute band based out of southern Bucks County. “When it comes to songwriting, having your own original sound and working hard on your performance there is no band that commands a greater respect than Skynyrd” says Jim. Tuesday’s Gone was a new experience for Jim. Singing songs by his all-time favorite vocalist would prove to be challenging and rewarding. After about a year Jim started finding his groove with it and became an inspiration to the rest of the band as well as their fans. Tuesday’s Gone played such venues as Ocean City MD “Bike week,” Hillbilly Hall, Parx Casino, Whiskey Tango and dozens more! Jim spent 10 years with Tuesday’s gone and retired from the band in August of 2016 to focus on playing and creating music with his 5 children.

Watch for new songs and videos on our website as we continue to document the musical footprint of Jim and his family band!

“There’s a fire burning inside of me, an ancient spirit setting me free,” Jim Beer.

Thank you to everyone for listening and sharing the music!